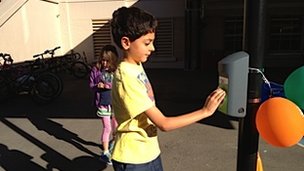 The Seattle Children’s Hospital Map was recently added to Feet First’s walking maps lineup. Make sure to view or download this latest map, or pick up your free copy of Neighborhoods on Foot from a variety of shops, libraries, and cafes.

On Tuesday, Mayor Mike McGinn announced that $3.25 million in transportation investments have been made possible by savings from the Spokane Street viaduct project. These funds are designated for a variety of pedestrian and transit projects, including $400,000 for the implementation of the Pedestrian Master Plan.

Lawmakers in Olympia are currently debating a House proposal that could create billions in transportation spending over the next decade, giving top priority to the maintenance and preservation of current infrastructure. Read more about this proposal in part one of a four-part series. Part two can be found here.

A 69-year-old woman crossing First Avenue South in the Georgetown neighborhood was fatally injured by a man driving a pickup on May 14.

Construction has begun on the 58th St. project in Ballard.

The Seattle City Council recently passed the South Lake Union rezone, which will set aside 5% of all unites for affordable housing.

A summer steps program in West Virginia is encourages residents of West Virginia counties to compete to see which county can walk the most miles in the summer. Twenty minutes of any physical activity counts as one mile of walking, and many residents who participated in the program last year continued to walk even after the program ended.

Recess has become an integrated part of many inner-city schools who are utilizing a program called Playworks. The program, which focuses on structured games and building social skills, has been proven to decrease bullying and increase a feeling of safety among students, in addition to increasing physical activity.

An investigation in Washington, DC found through undercover cameras that cab drivers often stranded disabled passengers on the curbs. Using volunteers with service dogs or in wheelchairs, the investigative team found that of 42 cabs tested, almost half the drivers ignored the pedestrians, took them to the wrong location, or charged them an extra fee.

Residents of the Lower West Side in New York City can now enjoy a new pedestrian plaza, complete with bistro-style tables, umbrellas, and chairs.

The Pedestrian and Bicycle Information Center will hold a webinar on Tuesday, May 28, from 10:00 AM 11:30 AM. The webinar, entitled Systemic Safety Project Selection Tool, will focus on the selection tool’s ability to address pedestrian safety issues.

A new type of traffic signal, called a HAWK signal, or high-intensity activated crosswalk, was recently installed at the University of Notre Dame. Crosswalks with a HAWK signal often result in more motorists properly yielding to pedestrians by flashing a yellow signal when a pedestrian wishes to cross.

Residents of the Berkshire town of Caversham will soon receive cards that can be used on sensors throughout the town, all to encourage residents to walk more during the summer months. Individual and community prizes will be awarded, such as money for new school and library books.

One London Assembly member is encouraging people to walk more by calling upon London Mayor Boris Johnson to support the efforts of Living Streets, which promotes road safety and pedestrian infrastructure improvements.

A recent study of Canadian first time homebuyers found that being near transit is the second biggest priority, after being in a safe neighborhood.