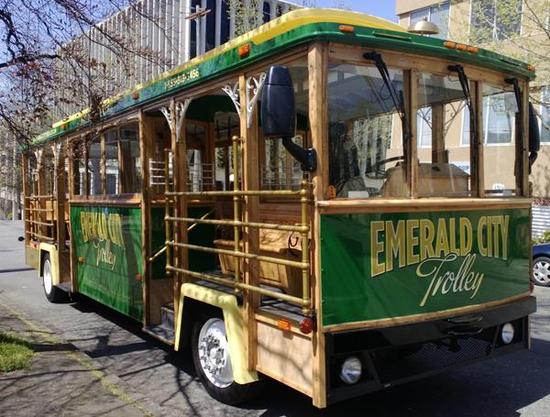 The Emerald City Trolley Company will start three lines of service on May 17. The trolley will run between Seattle’s notable attractions, including stops at Seattle Center, Ballard Locks, Woodland Park Zoo, and Pike Place.

The Metropolitan King County Council’s Transportation, Economy and Environment Committee will hold and open house on Tuesday, May 17 at 3:30 p.m., followed by a public testimony at 4:00 p.m. Citizens will be able to share how potential cuts in transit service might affect them; currently a 17 percent reduction service is scheduled to begin in 2014.

The Growth Transit Communities Partnership Oversight Committee is currently seeking public comments on a draft of their Growing Transit Communities Strategy. Their purpose is to determine how to make it easier to develop jobs and housing in areas with transit investments.

Washington was recently deemed the most bike-friendly state in the nation for the sixth consecutive year by the League of American Bicyclists. States are measured in legislation and enforcement, programs and policies, infrastructure, education, and evaluation and planning.

A podcast hosted by Michael Krasny focuses on the Center for Investigative Reporting’s recent findings that most drivers responsible for the deaths of pedestrians face no criminal charges. Guest speakers include a board member from California WALKS, the executive director of Walk San Francisco, and an environmental health director.

A recent study by the Pediatric Academic Societies found that children who live in a safe and walkable neighborhood are less likely to be obese. Researchers used data on 3,928 children in Toronto for the study, which also evaluated neighborhoods on car ownership, population, distance to retail locations, distance to parks, and safety.

Since the honor system for the Los Angeles subway system has recently been acknowledged as a failure, a locked-entry subway will soon be put into place. 192 turnstiles at 42 stations should be in place within the next few months.

New streetcars will soon be ready for business in Washington, DC. The six streetcars are currently undergoing testing and certification and should start service by the end of the year.

Researchers in two Riverside, CA neighborhoods are participating in a $250,000 grant to develop walkability plans. The grant will allow for in-depth neighborhood analyses, and the results will be used to develop a five-year improvement plan for each neighborhood to adopt.

An interesting look at public transit data in San Francisco, Geneva, and Zurich demonstrates how people use a city. The videos capturing the data show, for example, that activity in Geneva and Zurich is concentrated during rush hours but spread out more evenly in San Francisco.

A survey of 2,000 adults in Britain found that 43 percent walk for less than two hours a week, with 25 percent of adults walking less than one hour.

A new study of pedestrian behavior in a variety of cultures found that people from different cultures tend to cross the street in unique ways, even when the streets are set up similarly. For instance, 67 percent of pedestrians crossed against the red light at a legal crossing in Strasbourg, France, while only 7 percent in Inuyama did the same.