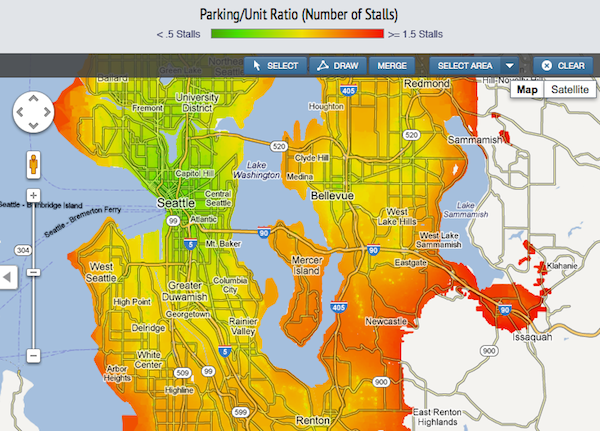 The Department of Planning and Development is current conducting a Ballard to Interbay Land Use Corridor Study. The project goals will address a balance of land uses, the potential for development that supports transit, and the opportunities for placemaking.

On May 18, Route 16 will switch from 5th Avenue N to a direct route from 3rd Avenue to Aurora, making the bus ride from Belltown or Downtown to Wallingford much more convenient.

The King Country Metro Transit agency, along with the Center for Neighborhood Technology and the Urban land Institute Northwest, recently developed a Right Size Parking Calculator web application to estimate parking demand in a single parcel of land.  The tool can be used not only be developers but also by governments making decisions about parking regulations.

The Sound Transit East Link extension plans have been finalized. The line, which should open in 2023, will cross Lake Washington on I-90 and will arrive at a daylight station by City Hall and Meydenbauer Convention Center.

After years of neglecting pedestrian stairways in Cincinnati, a group called Spring in Our Steps is determined to rehabilitate these public staircases, in addition to decrepit alleys and sidewalks.

The Center for Investigate Reporting looks at how poor design of many Bay Area sidewalks and roads has lead to increased pedestrian deaths. Many of the deadliest crosswalks are marked only with paint on the pavement and lack pedestrian lights or other warnings for drivers.

Though the flashing yellow turn signal is the traffic signal of choice for drivers, it is also the most dangerous for pedestrians.  Drivers are usually so concerned with findings gaps in opposing traffic that they fail to notice pedestrians in the crosswalks.

A free Webinar is coming this Tuesday called The Bottom Line: How Bicycle and Pedestrian Projects Offer Economic Benefits to Communities. The webinar, which takes place May 7 from 11:00am 12:30pm, will highlight recent research that shows the economic value that bicycles and pedestrian projects bring to communities.

A year after the President established the White House Council on Strong Cities, Strong Communities, the first annual report has been released. Work in pilot cities has identified best practices for improving economic development, safer neighborhoods, and better public health incomes. Further, the council has identified twenties communities as promise zones, which are areas suffering extensively from the recession that will receive extra benefits.

Registration is now open for the free telephone discussion by America Walks, Walk and Work: Innovative Ways to Integrate Walking into Workplace and Business Practices. The forum will take place on May 17 from 11:00am 12:00 pm and include presenters from George Washington University and the Pierce County Health Worksite Program.

Applications are now open for the sixth round of Walk Friendly Communities recognition program.  Seattle is still the only community to receive the Platinum Level designation.

A group in New York called StreetsPAC plans to stand behind those candidates who support safe, complete streets in upcoming municipal elections.  The group has already raised about $30,000 and hopes to increase the number into the six figures by the end of the year.

The Belgrade public transportation system is in trouble, as the city can only afford to sustain the system until June of this year. Ticket sales dropped by 20%, and the number of smugglers increased to 60% of the total number of passengers.

Ho Chi Minh City is hoping to bring public transport to the area, but rising living standards and consumerism are hindering the effects, as cars are quickly becoming the transportation method of choice. Though there are only 1.5 million cars in Vietnam for a population of more than 90 million, the number of sales is expected to grow by 8% this year. Commuters will have to be convinced to ride the trains.

Photo courtesy of rightsizeparking.org via The Atlantic Cities.