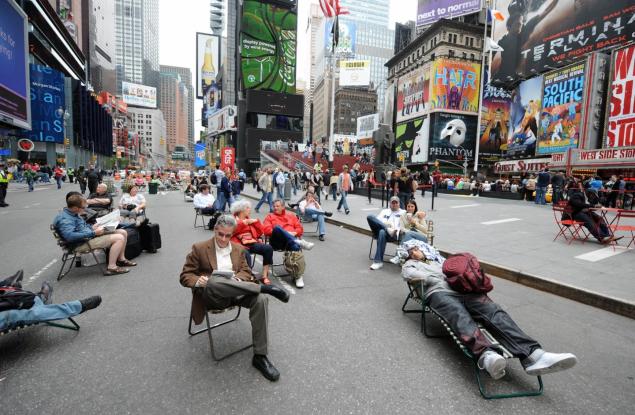 Seattle is slowly replacing several parking spots for an intended total of eight parklets. These mini parks are about two spaces wide and provide a place for seating or just to hang out for a bit.

The concept design for the $65 million mixed-used project connecting Pike Place Market with the waterfront will be shared with the public on April 24 from 4:00 p.m. to 7:00 p.m. The public is invited to review the evolution of the concept and to provide input as the project moves forward.

The public is invited to attend the Grant Reopening of King Street Station’s Main Waiting Room, which will take place Wednesday, April 24 from 11:00 a.m. to 11:45 a.m.

A recent field study in King County by the Transportation Research Board found that parking use declined as the percentage of parking cost to rent increased.  In addition, a greater supply of parking often resulted in an increased parking demand, meaning available parking might encourage more people to drive.

Walk Score made a list of the Top 10 U.S. Cities to Travel Car-Free, which includes cities that offer hotel rooms in walkable neighborhoods and green transportation options.  New York, San Francisco, Boston, Washington, DC, and Seattle made up the top five cities on the list.

Over a third of U.S. states have plans to raise money for transportation to cover budget shortfalls.  Virginia, for example, eliminated its gas tax while raising sales taxes and imposing a tax on wholesale fuel.

The Mayor of San Francisco launched the city’s Pedestrian Strategy to increase walkability and to make neighborhoods safe for pedestrians. Some of the intended improvements include upgrading 13,000 curb ramps in the next 10 years, improving safety around schools and senior centers, and giving pedestrians extra crossing time at 800 intersections citywide.

One New Yorker suggests a way to build a more comfortable subway car.  Some alternative designs would change the layout of seating areas and change the location of the poles for those who prefer to stand.

Skywalks seem to have a negative reputation, as many people are protesting the creation of a new one in Cleveland as other cities are tearing them down to return the pedestrian life to the street. Skywalks have been known to create dead zones around areas of development, and Cleveland residents worry a new one will negatively affect recent urban development.

Parks of a street in New York City, Broadway, have already been converted to pedestrian walkways and lounge areas , and the cities hopes to soon turn this area into a green space.

A group in New York city planning to collect discarded MetroCards, combine the remaining balances into full-fare cards, and distribute them to needy residents were banned from soliciting card donations.

The Institute for Transportation and Development Policy recently released its 2013 Corridor Rankings based on a bus rapid transit scoring system that recognizes high quality BRT systems around the world. Seven cities were awarded the gold standard, including Guangzhou, China, Rio de Janeiro, Brazil, and Lima, Peru.

Photo courtesy of Ron Antonelli via the NY Daily News.