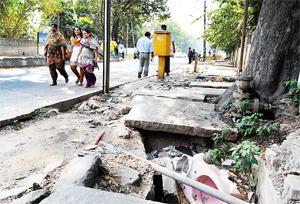 SDOT is planning to reconfigure 23rd Ave with a budget of $45 million. The project is said to be guided by
“complete streets” guidelines.

Anytime you spend $10 or more at Annapurna, you can enter to win a walking tour of the entire 3-mile tunnel from Capitol Hill Station to UW Station. Multiple winners will be chosen from a drawing in early March.

Obesity rates have declined among lower income school districts in King County after 41 grant recipients focused on creating safe, walkable and bikeable communities, along with other measures such as reducing the consumption of sugary beverages, and supporting farm-to-school programs.

What would make New York City safe for pedestrians? A diverse group of New Yorkers, from a cab driver to a law professor, share their opinions in a special feature.

Many community leaders in Syracuse, New York would like to see I-81 rerouted around Syracuse and replaced with a landscaped boulevard. Many urban freeways are beginning to fall apart, and today cities like Seattle are tearing them down.

Three elementary schools in National City, near San Diego, California, are participating in a program that uses Active4.me to track student miles to school and instantly notifies parents when their children have arrived on campus. Early program findings show that kids want to get to school using active transport, but parents are often the biggest obstacle because of safety concerns.

San Francisco, California eliminated parking along a street to lesson its drug trafficking and violent crime.

Filmmaker Todd Drezner has been filming In Transit, capturing footage of urban planners trying to sell pedestrian and bike-friendly streets to communities in Detroit and New York.

New smartphone apps have been created to encourage and track walking.

The Bangalore Mirror’s “Footpath? My Foot” series, written to highlight the need for better pedestrian walkways in the city, has motivated local legislative council members to demand funding for pedestrian improvements. In 2013, a total of 382 pedestrians were killed on the streets of Bangalore.

The UK Government, Mayor of London, and London 2012 Olympic Ambassador have unveiled a national legacy plan for physical activity, which highlights walking activities, from safe routes to school programs to volunteer-led walking groups, as a key solution toward improving health and fitness.

Photo courtesy of the Bangalore Mirror