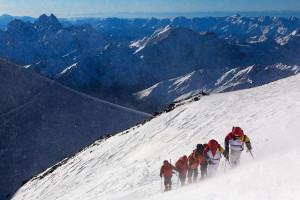 A handout picture taken during the Sochi 2014 Winter relay on October 22, 2013 and released by the Sochi 2014 Winter Olympics Organizing Committee, shows torchbearers carrying an Olympic torch to the Elbrus Mount in Russia’s North Caucasus region. Russian torchbearers has started in October 2013 the history’s longest Olympic torch relay ahead of February’s Winter Games in Sochi, which will take the flame across the country through all 83 of its regions, including extreme locales such as Chukotka, the remote region in Russia’s Far East, the turbulent North Caucasus, and even Russia’s European exclave Kaliningrad. AFP PHOTO / SOCHI 2014 ORGANIZING COMMITTEE RESTRICTED TO EDITORIAL USE – MANDATORY CREDIT “AFP PHOTO / SOCHI 2014 ORGANIZING COMMITTEE” – NO MARKETING NO ADVERTISING CAMPAIGNS – DISTRIBUTED AS A SERVICE TO CLIENTS–/AFP/Getty Images ORG XMIT: –