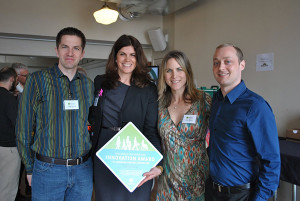 The San Juan Island Trails Committee was recently honored by Feet First with a Walkable Washington Innovation Award. The Know Your Island Walk series, created and implemented by Eileen Drath for the Trails Committee, consists of monthly walks guided by community members.

The Redmond Central Connector (RCC) received Feet First’s highest honor for an exceptional project contributing to the creation of a walkable community. The RCC is a former rail 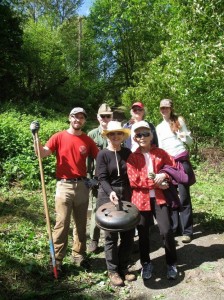 corridor, now converted into a regional trail that has increased the number of people walking and bicycling in downtown.

In anticipation of light rail service in 2021, the Northgate area will be receiving a number of environmentally sustainable pedestrian and bike improvements, including new or restructured sidewalks, new shared use paths, and a promised pedestrian and bicycle bridge over I-5, connecting the light rail station with North Seattle Community College.

This past weekend Seattle residents cleaned fifteen stairways across the city as part of this year’s Stairway Spring Cleaning Day, organized by Feet First and Seattle Stairway Walks co-authors Cathy and Jake Jaramillo.

Lakewood, Ohio has made school buses obsolete. The seven elementary schools, two middle schools, and one high school in the school district are all within walking or biking distance of the children they serve, saving the district millions of dollars.

New York City is adding 120 speed-tracking cameras to be used in school zones, during school hours. Transportation Alternatives said speed cameras should be turned on at all times, in part because low-traffic hours can be the most dangerous.

“Rethinking Streets”, a new report from the University of Oregon’s Sustainable Cities Initiative highlights 25 Complete Streets projects from around the U.S. in order to help communities imagine alternative futures for their streets.

According to a new report from Transportation for America, the nation’s transportation trust fund is facing a crisis, with the potential that all new transportation projects with a federal share will be shelved” perhaps indefinitely”starting as soon as this summer.

A group of researchers are using neuroscience to explain car dependence. They found that people do not use the part of their brains that evaluate a decision when choosing a mode choice but rather “rely on neural regions that perform an action without much concern for outcome.”

The UK celebrates National Walking Month in May, a nationwide campaign organized by Living Streets, a nonprofit that has campaigned for safe, attractive, and enjoyable streets since 1929.