STORY FROM THE SOLE: THE THURSDAY WALKERS 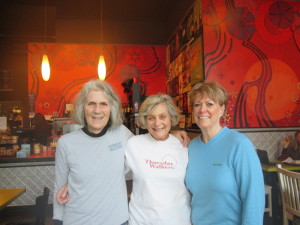 My aunt Jody first introduced me to the Thursday Walkers, whose loop takes them through downtown and up Queen Anne Hill, which they say seems to change grade every day. She invited me to join a walk one winter morning to learn more about the group and one of their four founding members, Helen.

I meet Helen and Jody, who are donning their Thursday Walkers shirts, on a downtown corner long before sunrise. As we start walking women emerge from apartments and side streets to join. Helen has a spreadsheet with over fifty names, making the composition of the group a surprise each morning, however there is always someone walking! We leave the final meeting spot when one walker pulls out her phone declaring, It’s exactly seven atomic time.

The Thursday Walkers began as a way to support Helen after her husband passed away. Her close friends knew that the walks would keep her engaged and active. Eleven years later, the women continue to walk avidly. Aside from men, when I ask they quickly respond by shaking their heads, the Thursday Walkers remain incredibly inclusive with members joining through friends or by simply seeing the group out on a walk.

Helen, a Seattle native and graduate of Franklin High School, lived for many years on Mercer Island where her habit was to get in the car and drive just about everywhere. Her life downtown is the opposite. Helen is part of a growing movement, especially prevalent in Seattle, which has seen a boom in residential units downtown, 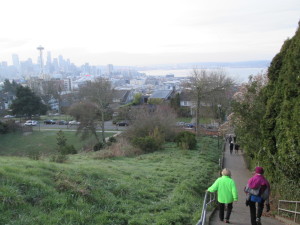 to move to the urban center of the city. Rejecting the Sun City-like sprawl popular with many retirees, Helen chose to live in a walkable, vibrant neighborhood.

During our walk the group flows in an organic way; the leader constantly changes, as do the pairs talking. The walk is wonderfully efficient, the lights perfectly timed or at times ignored so that it seems we never pause to stop. I piece together a Thursday Walker canon as the same stories and sentiments are recounted. The group is comprised of an impressive array of women and I am told that If I have a question, someone here can answer it.

These early morning walks put on display the range of people living downtown. Every morning they greet the same man selling Real Change in Lower Queen Anne. The walkers keep an informal tab on the characters downtown, and worry when they miss a regular.

The walk culminates at Kerry Park. Helen reflects on how grateful she is to live in this part of the world, and with that brief pause we are already headed back down the stairs. An hour and 8,000 steps later, so I am told, we sit down for coffee at the Cherry Street Coffee House, whose owner is treating his loyal customers to brunch the following week. The walks that once began as a way to help Helen heal, continue to provide the Thursday Walkers with a wonderful way to exercise and stay connected to their city and one another.