Story from the Sole: Dr. Jason Mendoza and his Walking School Bus Study 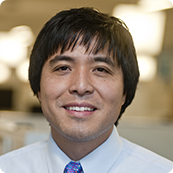 Throughout the month of May students across the country celebrate getting to school using their own power. The benefits of walking or rolling to school are myriad and many may seem obvious, but having data-driven support is invaluable to the Safe Routes to School movement. Doctor Jason Mendoza and a team of researchers at Seattle Children’s Research Institute are currently studying Walking School Buses in Seattle Public Schools with the driving question: do they work?

I first met Dr. Mendoza early one morning at West Seattle Elementary School. On this particular morning the students in the Walking School Bus were joined by Governor Jay Inslee, who gave high fives to walkers and encouraged them to stay active. West Seattle Elementary, along with Sanislo, Graham Hill, Rainier View, John Muir, and Emerson Elementary, is part of a study on Walking School Buses. Half the schools are controls while the other half have daily, adult-led walking groups. Researchers are collecting a variety of data points including BMI, physical activity throughout the day, which is tracked using accelerometers, attitudes on walking and information on the built environment.

The goal, Dr. Mendoza explains, is to see if Walking School Buses increase physical activity and encourage changes in travel habits. How to make these walking groups sustainable and ongoing in disadvantaged communities is equally important. Dr. Mendoza explains that while more low-income students walk, they are often faced with less desirable conditions, making safe routes to school a priority. 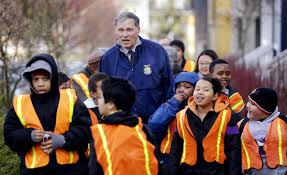 Some parents have framed Dr. Mendoza’s research as obvious, saying we have already been doing this for years, what took you so long! Dr. Mendoza concedes to some of these claims, however many expressing these opinions are part of affluent communities and Dr. Mendoza wants all students to have a safe way to walk to school.

Dr. Mendoza traces his interest in walking to school to his days working in a clinic as a pediatrician, where he saw a number of overweight and obese children. He knew the clinic was not the only place where the issue could be solved. Gesturing towards the window and city street below, he explains it needs to be solved out there too.

Walking, biking, and other modes of active transport are accessible to many students. Using these activities as a means to get to school makes even more sense as students must get there anyway. How wonderfully simple at first glance! Yet, as Dr. Mendoza explains, compared to the previous generation, where nearly half of all students walked or biked to school, today that number is just around 13 percent. 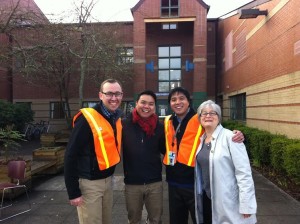 Over the next two years, researchers at Seattle Children’s Research Institute will expand the study to include twelve more schools for a total of eighteen participating schools. A smaller study, focused on bike trains, using accelerometers and GPS to measure student physical activity, is underway in two schools with two more planned.

Photos courtesy of www.seattlechildrens.org and The Columbian.