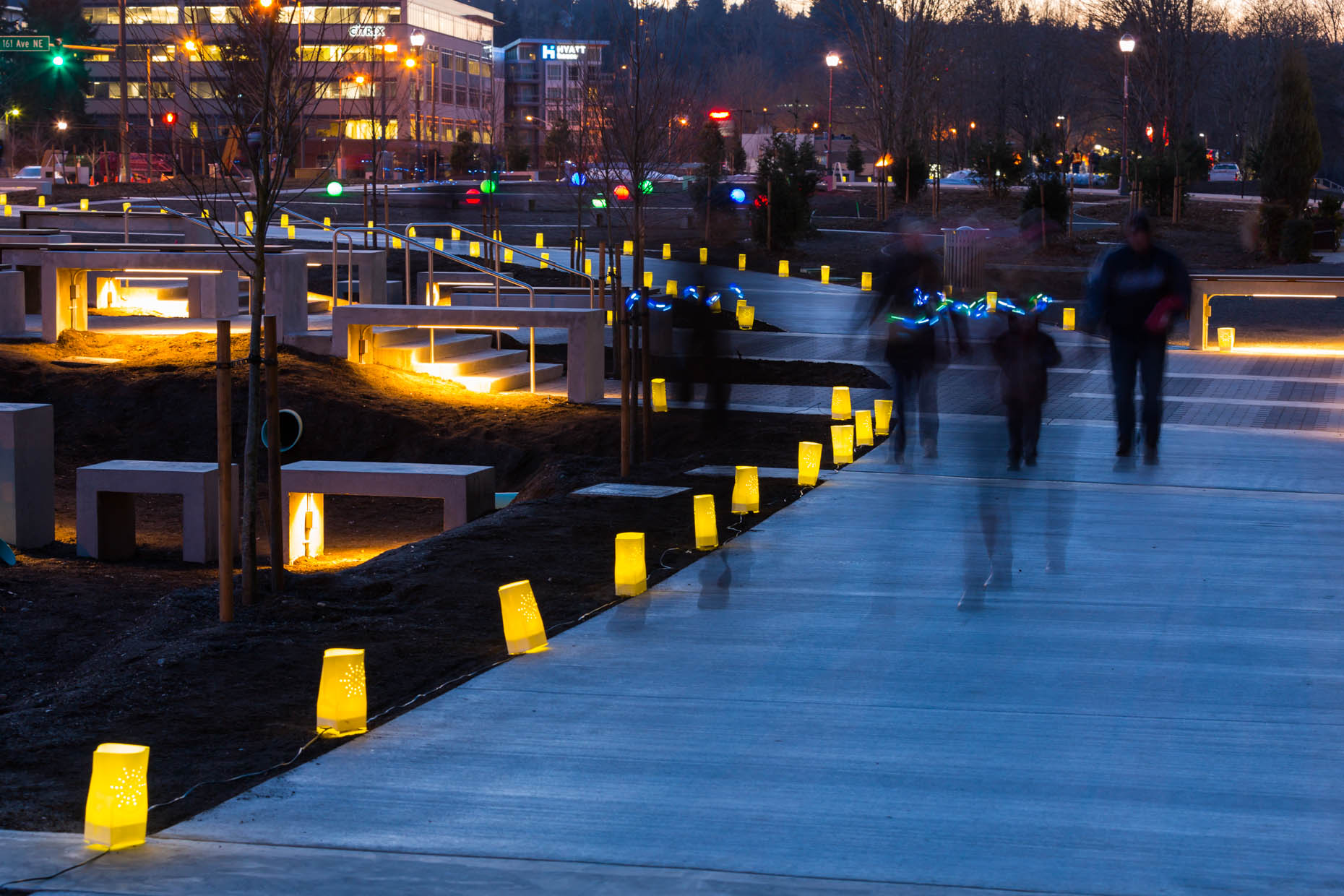 Story from the Sole: Carolyn Hope, Shape Shifting the Past to Support the Future

The City of Redmond began planning the project in 1997. In 2010, Redmond finalized an acquisition strategy of four miles of the Eastside Rail Corridor along with its partners the Port of Seattle, King County, Sound Transit, and Puget Sound Energy. In 2013, Phase 1 of the project was completed, which included two new street crossings of the former rail corridor, a new regional trail encouraging walking and biking, and a significant investment in integrated art and urban design to 10 acres of park space along the trail. The Redmond Central Connector’s development has also encouraged new businesses to open in Redmond’s downtown core including Super Jock and Jill running store, Homegrown sandwich shop, Tipsy Cow restaurant, Prime steakhouse and more. According to Carolyn, Redmond began tracking trail use in October 2014, and the trail has averaged an impressive 13,500 users per month. This includes residents of the many mixed use developments in Downtown and tech workers, Carolyn says, who work in Redmond Town Center and use the Connector to travel to Old Town Redmond for lunch.

The new space also draws vibrant cultural events to Redmond, including the So Bazaar Night Market. Designed around an urban night market concept similar to those enjoyed by cities like Vancouver, BC and Brooklyn, So Bazaar brought artisans, performers and chefs to the Redmond Central Connector on three Thursday evenings in August 2014, providing opportunities for residents and visitors to enjoy art, food and entertainment. The event helped foster a sense of community among residents as they came together to enjoy their city and also, says Carolyn, helped encourage those working in Redmond to consider living there as well. This is a key issue for the area as many thousands of people commute to Redmond, but do not live there, which causes significant transit issues.

Community involvement, according to Carolyn, was an element that shaped the Redmond Central Connector from its inception.

Events were held on the corridor itself, with residents, workers, and regional elected officials arriving by car, foot, and bike to find a small band, balloons, and big top tents along the railroad tracks. Inviting residents to walk the corridor, the project took root in their minds long before it was constructed.  A conversation on the Park Bench: Most unique was the use of a park bench where attendees were interviewed and recorded by a community theater group about wide-ranging subjects, from the project itself to broader issues about why they loved their community. These podcasts were then edited into a this American life type broadcast that was posted on the city’s website. In 2011, the city partnered with Feet First to host a Walk and Talk event led by Mayor Marchione to tour the project, meet the project artist and view his work, and learn about the design from the consultants and staff.

What’s next for the project? Some final touches will improve the Redmond Central Connector’s first phase, including the construction of a square in which to host events as well as the installation of a repurposed 1950’s style sign to add visual interest and design flair to the space. During Phase 2 of the project, under construction this year, the trail will be extended 1.3 miles north along Willows Road.  On the heels of that project, the City will design and build the last phase of the trail, 1.6 miles to the Kirkland border at 124th Ave NE.

The Redmond Central Connector is a complex, impressive undertaking that will enhance multiple modes of transit, including walking, in Redmond and will bring positive changes to the area and the people who live, work, and play in the area for many years to come.