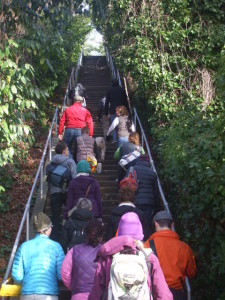 Join us Saturday, April 25 for Stairway Spring Cleaning Day to help keep your neighborhood  walkable and honor Seattle’s stairway legacy. Jake and Cathy Jaramillo, authors of Seattle Stairway Walks, in conjunction with Feet First, Seattle Neighborhood Greenways, and the City of Seattle, are organizing a city-wide cleaning of public stairways. This first-ever stairway spring cleaning event, which falls on the Saturday after Earth Day, will not be possible without a generous volunteer effort from Seattle residents throughout the city.

Sign up today to volunteer and choose among fifteen stairway locations across Seattle.

Stairway Spring Cleaning Day serves as an effort to both maintain the impressive network of Seattle’s public stairways and spur greater community support for these stairways. Seattle’s stairs are a valuable community asset; they serve as scenic neighborhood byways that connect us to parks, playgrounds, bus stops, and outdoor recreation across the city. In total, there are more than 650 publicly accessible stairways within city limits, which serve as vital pedestrian infrastructure. They are also a historical legacy, as the stairway network dates back over 100 years.

The Seattle Department of Transportation, which owns 509 of these stairways, frequently monitors their condition, and in 2013 had a dedicated budget of $1 million for their upkeep. With these funds, SDOT was able fund the repair of 32 stairways, and the rehabilitation and replacement of 12 others. Despite their admirable work, SDOT simply does not have the resources to clean debris and remove pesky invasive species from the entire public stairway system. Accordingly, a coordinated volunteer effort to spruce up stairways on Stairway Spring Cleaning Day will go a long way to create a safer pedestrian environment and enable Seattle residents to better appreciate the city’s world class public stairway network.