Late last month, Sound Transit took a big step forward in promoting the development of walkable communities throughout central Puget Sound, selecting $50 million worth of nonmotorized projects for funding out of their $100 million System Access Fund. This fund was created by the Sound Transit 3 ballot measure enacted in 2016 to finance projects improving access to their regional transit system. Sound Transit provided full or partial funding for thirty out of the fifty-five specific project ideas submitted from local jurisdictions.

Feet First advocated for the System Access Fund because we believe Sound Transit is more than just a rail system it is an historic investment that can catalyze the growth of walkable urban centers in the areas surrounding the stations, which in turn promotes higher system ridership. Indeed, we believe this potential to create walkable places is one of the reasons Sound Transit has enjoyed strong public support.

But honestly, Sound Transit has historically been falling short. Sound Transit 1 and 2 had to deal with higher project costs and lower revenues, leaving little to spare for anything but the rail line. Yet, despite these financial constraints, Sound Transit still spent tens of millions of dollars on parking structures to ensure automobile access to the stations. Walking, rolling, biking and bus access got short shrift. That’s why the System Access Fund included in Sound Transit 3 is so important.

Feet First has weighed in on these deliberations over the system access fund, recommending which of the fifty-five projects under consideration were most deserving of receiving funding. In choosing projects to be funded, we’ve asked Sound Transit to focus on two critical factors:

These two factors were hinted at but not explicitly called out by Sound Transit in the six criterions they used to decide which projects to fund. And if Sound Transit focuses solely on the physical connection to the stations, it means that they will miss the opportunity for more transformative investments.

Here are two examples of the sort of excellent projects that we recommended for funding and that Sound Transit ultimately chose to invest in: 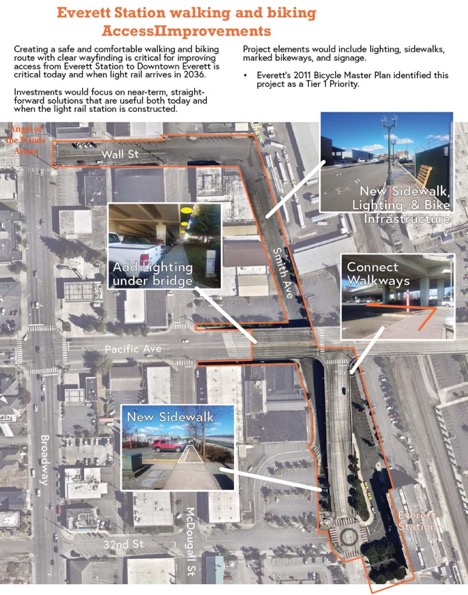 The area around Everett Station will soon be home to thousands of new residents. Everett’s proposed improvements will make Wall Street and Smith Avenue, one of the key routes from the station to downtown, into an accessible, comfortable main street. It also focuses on quick-build improvements that can make the walk or roll to the station better today, not years down the road.

The new frequent ST express bus route through Parkland will bring fast, frequent transit service to a corner of the region that needs it the most. Yet the blocks around the bus line are often lacking sidewalks. Pierce County’s station access proposal at 112th will build sidewalks that will fill those gaps, making access to the future bus rapid transit station at SR-7 safer and fostering the development of a walkable urban center in the surrounding area.

As a statewide advocacy organization, our focus was on what was best for the region as a whole. Having said that, we also know that local advocates for each project can provide insights and details into each project that we may not have. We also understand that some projects might be more appropriately funded by local jurisdictions rather than Sound Transit.

Feet First will continue to advocate for these sorts of transformative nonmotorized investments by Sound Transit. The agency plans updating their system access policy later this year and conducting another round of project evaluation and selection for the remaining $50 million in the System Access Fund within a few years. However, there is some concern that this money could go away if money is tight. There was a similar pot of money in ST2 that was dissolved as a result of the Great Recession. We must make sure this doesn’t happen again.