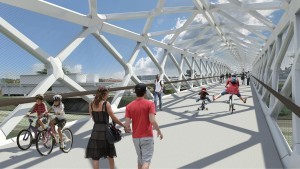 Pedestrian Challenges: The I-5 freeway effectively split the Northgate community in two. To walk from the future station to North Seattle College currently requires a long detour via Northgate Way to the north or N 92nd Street to the south.

A key victory was securing funding for the Northgate Pedestrian/Bicycle Bridge. This bridge will span I-5, providing a safe, direct connection between the light rail station and North Seattle College, DSHS Community Services Office, and homes – west of the freeway. This bridge will carry thousands walkers and bicyclists every day, tying together the two halves of the emerging urban village currently divided by the freeway.

Feet First formed a coalition consisting of local community groups, non-profit organizations, North Seattle College, and grassroots activists to advocate for funding. In 2012, this coalition convinced Sound Transit and the City of Seattle to set aside $20 million for walking and biking improvements around Northgate Station. Half of this money was dedicated for the bridge, with the other $10 million set aside for additional pedestrian and bicycle improvements within a fifteen minute walk of the station, such as a protected bike lane along 1st Avenue NE and a new sidewalk along NE 103rd Street.

Read More About the Station: