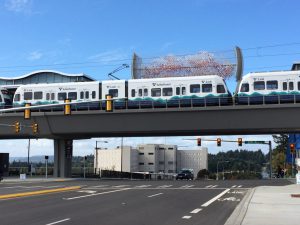 Background: Angle Lake Station opened on September 24, 2016 and is the current southern terminus of Sound Transit Link Line 1. This elevated station is located in an area currently consisting of mostly single-family homes, airport parking lost and hotels, and large-parcel office areas. In 2015, the City of SeaTac adopted a station area plan to direct potential transit-oriented development around the station.

In 2014, Feet First hosted a Walk & Talk event at the station that brought together city officials, residents, and other interested stakeholders to discuss site-specific walkability issues. We also conducted a walking audit near Madrona Elementary, a school located less than a ½ mile from the station. We used the information obtained from this audit to provide feedback on the development of the City of SeaTac Angle Lake District Station Area Plan. This audit supplements a pedestrian and bike connectivity study done at this station in the same year.

Read More About the Station: