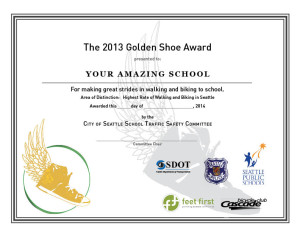 The City of Seattle School Traffic Safety Committee is happy to announce the winners of the 2013 Golden Shoe Award. This annual award is given to three Seattle schools that show distinction in promoting walking and/or biking to school.

The winners for 2014 winners will be honored at June 4th meeting of the Seattle School Board.

Why the Golden Shoe?

The Golden Shoe is an award to celebrate safe, active, and healthy school transportation — in other words, getting to school by the power of your own two feet. Walking and biking to school have declined dramatically in the past forty years, corresponding with a rise in inactivity and related health problems among today’s youth, as well as an increase in traffic-related problems near schools.

When the Seattle Schools adopted a neighborhood schools policy in 2009, one goal was to promote community building that would spring from having a large concentration of families living within their school walk boundaries. The District was aware of the probability, however, that the reduction in yellow bus service would lead to increased numbers of families driving — even short distances — to school. The Golden Shoe Award is one piece of a coordinated and developing effort to give schools more tools to encourage safe walking and biking to school, in this case by rewarding positive trends.

How do schools qualify for the Golden Shoe Award?

Every spring, the school transportation department coordinates a survey of student travel, known as the mode choice tally, in all elementary and K-8 schools district-wide. During the first week of June, classroom teachers ask students how they traveled to school and how they plan to leave school at the end of the day. The surveys are tallied and analyzed by the City of Seattle School Traffic Safety Committee, an inter-agency group that eventually chooses the winners of the Golden Shoe Award. In 2013, forty-four schools submitted tallies, providing the district with valuable information about numbers and trends in school travel.

The following schools deserve special recognition for submitting data from 95% or more of their classrooms:

The next mode choice tally will be conducted during the first week of June, 2014. Seattle public school principals will receive information about how to conduct the tallies several weeks prior to this date. Any independent schools wishing to participate should contact Jen Cole at Feet First for more information.