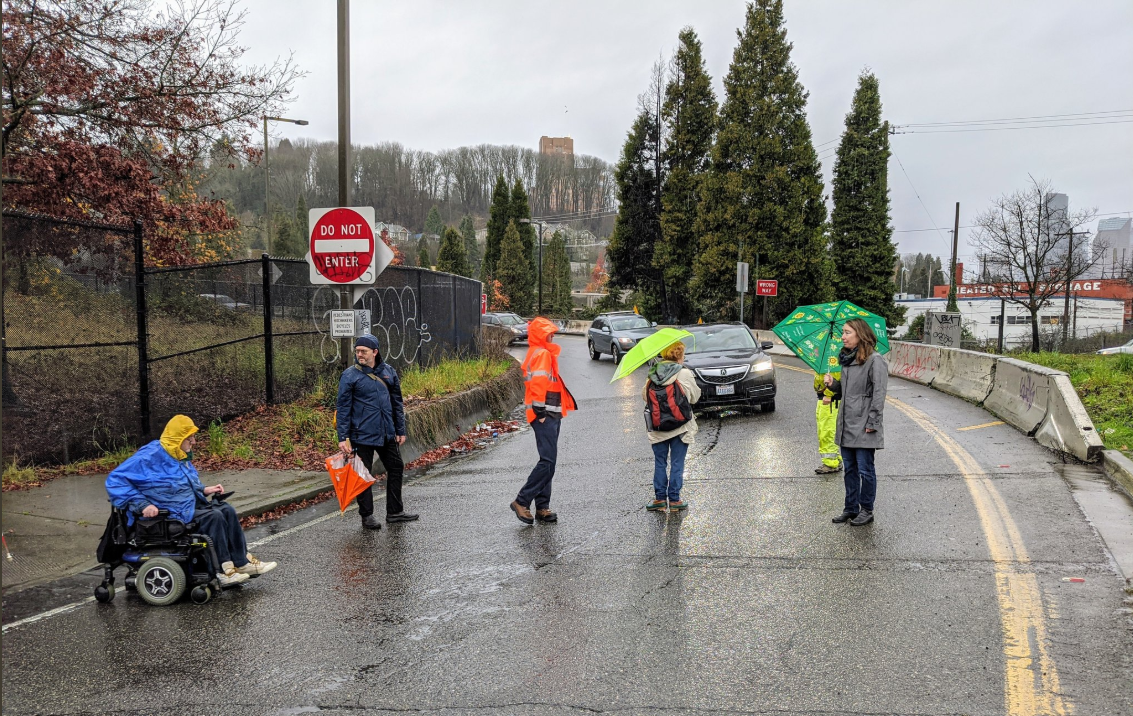 Redesign I-90 Ramps So People Can Actually Cross Them (Without Fearing for Their Lives!)

If you’ve ever walked or rolled on Rainier Avenue in Seattle near the I-90 ramps, you know how terrifying it can be. Cars enter and exit the ramps at high speeds, with little to no visibility coming around the curves, and the pedestrian crossing signs do little to slow traffic. And yet, Rainier Avenue is such a busy transit corridor that King County Metro is planning a new RapidRide bus line — replacing the #7 — to keep up with increasing demand for public transportation up and down the corridor. This high volume arterial clearly serves more than cars and should be redesigned to reflect this reality — ensuring that all pedestrians and transit riders can safely and easily get where they need to go.

This is not a new problem; Feet First has walked and talked about this issue multiple times, including during the design phase for the Judkins Park light rail station, as well as a Walk & Talk event featuring former Seattle City Councilmember Mike O’Brien. The need for improvements is a real and clear issue for pedestrians.

The nearby Judkins Park Link light rail station in Seattle’s Central District is expected to open in 2023. Its location makes it a key interchange station between East Link light rail and bus routes on Rainier Avenue South and 23rd Avenue South. The station is also located within walking distance of five local parks, Thurgood Marshall Elementary School, the Northwest African American Museum, Lighthouse for the Blind, and several other nonprofits providing essential services and resources to the community.

The opening of the light rail station will significantly increase the number of people moving around the area, so now is a good time to make the surrounding area more walkable. Officials from SDOT and WSDOT are interested in doing just that, so on December 19th, a group of pedestrian and disability rights advocates joined them on a tour of these dangerous crossings to come up with plans for improvement. It felt appropriate that we got an up close look at these unsafe conditions amidst some of the rainiest and darkest weather Seattle received in 2019. 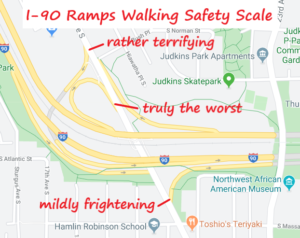 Our group of fifteen first walked across the ramp near Massachusetts Ave, then crossed Rainier and headed north under I-90 to experience the off- and on-bound ramps on the west side of the street. These slip lanes are designed to allow as many cars as possible to take a right turn without having to slow down, making them extremely difficult to navigate as pedestrians. All three ramps felt unsafe to cross, but the most egregious is the off-ramp taking cars south on Rainier: the curve is so tight that it’s nearly impossible to see when cars are coming, there’s no marked crosswalk, the curb ramp isn’t ADA-accessible, and there’s a massive fence that blocks the view even further. 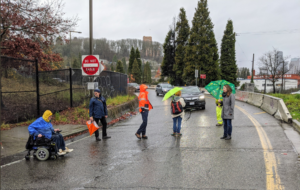 You know an intersection is bad when neon-clad city officials have to block oncoming cars with their bodies (Credit: David Seater)

In response, WSDOT is planning some short-term improvements to these ramp crossings: marking crosswalks where there are none, installing lighted pedestrian crossing signs positioned at eye level for drivers, and narrowing the ramp lanes with painted crosshatches and pylons to reduce vehicle speeds. While it’s great to know that these changes will be implemented in the next year, paint and pylons can only go so far to turn Rainier into a more accessible, safe, and pleasant street for getting around. 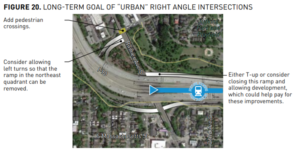 Ultimately, we want to see long-term solutions that prioritize the movement of people, not cars. The recent speed limit decrease is a good start, but not enough on its own. Each of these slip lanes should be redesigned to come to a stop, with stoplights at the end – ensuring that cars slow down after exiting the highway and take their turn before entering Rainier. This kind of street redesign is expensive though, and WSDOT will need to hear from the public that these changes are wanted. Stay tuned for ways to make sure WSDOT knows these intersection improvements are necessary for pedestrian safety!