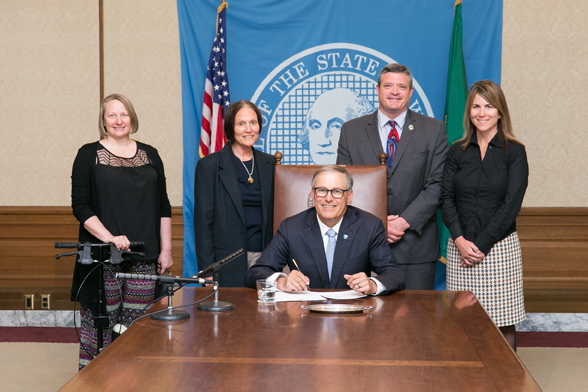 On Monday, May 11, 2015, Governor Jay Inslee signed into law Senate Bill 5957, which creates a Pedestrian Safety Advisory Council. The bill, which was co-written by Feet First, had earlier been approved by both the full House and Senate with bipartisan support.

The new law creates a Pedestrian Safety Advisory Council to include experts in law enforcement, transportation, public health, and pedestrian safety. The council will take a sample of pedestrian fatalities for an in-depth review, use existing data to get establish trends, and explore the most promising strategies for reducing these crashes.  During the course of these investigations, the council will review relevant law enforcement incident reports. It will also examine the relevant statutes, ordinances, and policies. Drawing on these investigations, the council will provide an annual report recommending measures that could improve safety for people walking as well as exploring ideas for funding the most promising strategies and including that in the annual report for the legislature to consider in future sessions.

The need for this legislation has never been greater. The data elevated pedestrians from tier 3 to tier 2 under its Target Zero Plan, indicating that more people are dying on roads at a higher rate than other modes. During the years 2008-2013, traffic collisions involving pedestrians resulted in 382 fatalities and 1,753 serious injuries. The Pedestrian Safety Advisory Council will provide lawmakers, law enforcement personnel, and others the information and analysis they need use to ensure people, the people living and working in our communities, are not serious injured or killed in vain.

While we were putting together testimony and heading to Olympia, we were sent a letter from the Tammy Shoop the mother of Caleb Shoop, 19, who was struck by truck while in a crosswalk in Kenmore. He died four days later of traumatic brain injury. The letter was powerful to us at Feet First and made it ever more important for this bill to pass.

I cannot tell you how painful and traumatic this was. There are no words. It is absolutely beyond my capacity to even begin to describe the overwhelming grief, sorrow, and despair that have defined this last year. My son was only one of many pedestrians killed in the State of Washington this year. Each of them had a story. Each loss is unacceptable and unimaginable.

While nothing can bring back this tragedy that happened to the Shoop family, we can advocate for safe places for people to walk. We must protect our most vulnerable users. These deaths and serious injuries are preventable. We must do more, and this bill puts us on the right path.