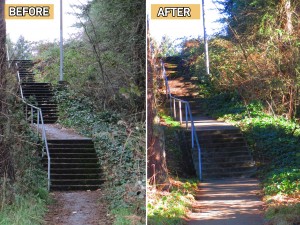 On a cool, crisp January morning, twenty volunteers gathered at Seattle’s Olympic Hills Elementary School to celebrate the legacy of Dr. Martin Luther King, Jr., and serve the greater community at large. Several compassionate volunteers from Seattle Children’s Hospital and UW Radiology, along with some independent volunteers, joined Feet First in cleaning up the route of a Walking School Bus, a parent-led walking group that leads students to school on “Two Feet Tuesdays”. The passion and commitment from these volunteers definitely fit the character of the day, and the creative altruism that MLK, Jr. espoused.

The focus of the volunteer project was on cleaning up a staircase and walkway within yards of Olympic Hills Elementary, which is one of four Seattle schools currently participating in a Safe Routes to School initiative supported by Feet First. This walkway had fallen into disarray over the past several years. Thorny blackberry bushes and wild entanglements of English ivy had been steadily encroaching upon the stairs, making it feel like an uninviting place for kids walking to school. Moreover, rain soaked leaves, slippery pine needles, and other debris littered the walkway, making it potentially hazardous for children and adults alike.

In order to approach the task at hand, volunteers formed two separate work groups. One set of volunteers, armed with rakes, brooms, and clippers, tended to cleaning the walkway and trimming the vegetative growth that was encroaching the stairs. The other group, equipped with loppers and shovels, concentrated on removing a thick patch of blackberry bushes, which had overtaken the bottom of the staircase, and made the path feel like a rather uninviting place. After a few hours of hard work, the staircase and walkway became a much more appealing place to walk.

By the end of the day, volunteers had impressively filled up an entire dumpster with invasive species and assorted yard waste. The stairs, which had been obscured by the thicket of blackberries, are now clearly visible from the street. Additionally, mulch was spread throughout the site where the blackberry bushes had once been, creating a warm, pleasing feel.  A neighbor driving by in her car even stopped to get out and thank the volunteers for all their hard work in transforming this public walkway into a more pleasant, welcoming space.

“You would be surprised how much of a difference a clean, inviting walkway can make to enrich the experience for kids walking to school,” says Jen Cole, Safe Routes to School Program Director. “The effort to clean this once untidy walkway, combined with the installation of safety flag buckets in the nearby area, will really go a long way to make the Olympic Hills neighborhood safer for walking.”

This project was made possible by volunteers from Seattle Children’s Hospital and UW Radiology through the United Way of King County, and the community of Olympic Hills Elementary School. We’re also thankful for the support of Public Space Management Program, Development Lead Jennifer Wieland and the Seattle Department of Transportation’s Urban Forestry Division, which generously provided the materials used for this project.