Jane’s Walk virtual version is back! But in a new form: while in-person group walks are suspended again for 2021, you can still participate in what makes urban walking great by playing our Feet First “On Your Walk” Bingo game.

HOW TO PLAY
Download the bingo board, and between May 7-9th, fill out as many squares as you can while you walk! You can go on as many walks as it takes in the weekend to complete a horizontal, vertical, or diagonal line. Or go big and try to complete the entire board!

Write in the names or street locations where you find each item – for instance, the name of a store or park, or the intersection you walked through.

HOW DO I WIN?
Turn in your completed bingo card with your email address in any of the following ways and you’ll be entered to win one of three raffle prizes! 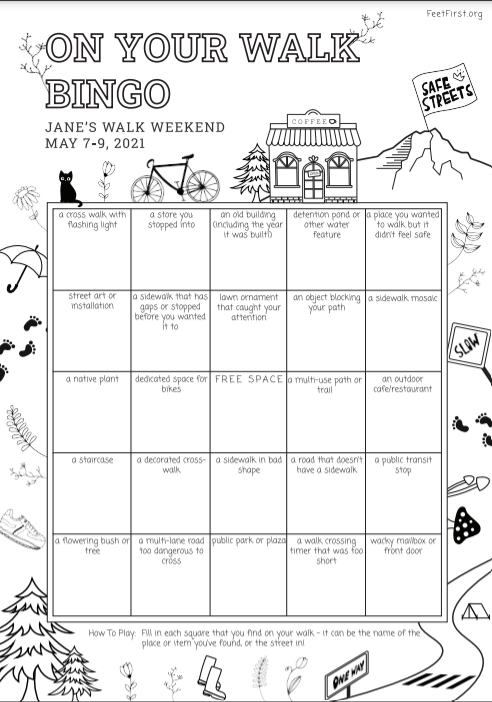 What is Jane’s Walk?

Jane’s Walk was founded to celebrate the life and legacy of urban activist, Jane Jacobs, who believed in the power of individuals to influence their city. It now takes place in more than 225 cities worldwide during the first weekend in May each year. Feet First has been hosting Jane’s Walk festivities for the state of Washington since 2014.

Who was Jane Jacobs?

Jane Jacobs (1916-2006) was an urbanist and activist whose writings championed a community-based approach to city building. Jacobs saw cities as dynamic, complex ecosystems with their own logic and order. She advocated for higher density in cities, short blocks, local economies, and mixed use zoning. Jacobs helped derail the car-centered approach to urban planning in both New York and Toronto, and invigorated neighborhood activism by helping to stop the expansion of expressways and roads. She lived in Greenwich Village until 1968, when she moved to Toronto and continued her work and writing on urbanism, economics, and social issues until her death in April 2006.

A firm believer in the importance of local residents having input on how their neighborhoods develop, Jacobs encouraged people to familiarize themselves with the places where they live, work, and play. Learn more by visiting the original Jane’s Walk Toronto webpage.