IWALK INSPIRATION FROM ACROSS THE STATE, Part I

For some schools IWALK 2013 seems far in the past, while for others, the IWALK celebrations are jumping-off points for year-round Walk to School campaigns. We hope these Washington schools provide ideas and inspiration for those hoping to host an IWALK event in the future. Remember, IWALK events can take many forms and can start small — really small! We hope to see more and more schools participating in IWALK each year.

The nature of the Feet First IWALK Challenge allowed for just three winners, but all submissions were impressive and a joy to read. Below are some highlights from schools with impressive events. You can also read about this year’s IWALK Challenge winners from a previous blog post.

This year’s IWALK Challenge saw submissions from many veteran IWALK schools, so it was a treat to read about IWALK newcomer Newport Heights Elementary in Bellevue, Washington. Parents noticed that over half of the students were being driven to school, and decided to respond by hosting an event that would show the Newport Heights community that there are other healthy and enjoyable transportation options. With support from Cascade Bicycle Club and the City of Bellevue, walking and wheeling students were given bee key-chains and reflectors. In a clever educational twist, Newport Heights assigned the fun task of handing out the swag to the students’ younger siblings in pre-Kindergarten. By involving future students in the event, they promoted walking and biking as a desirable way mode of travel and planted the seeds for program sustainability. We are excited to watch as Newport Heights Elementary grows its walk and wheel program in the future! 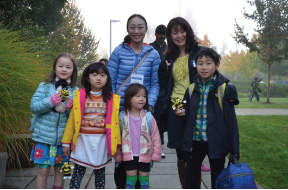 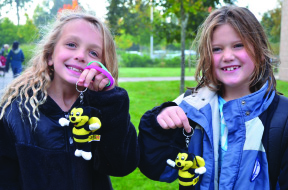 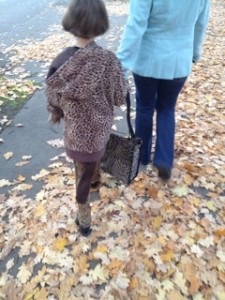 Graham Hill Elementary in Seattle, Washington hosts a multi-faceted and inclusive month-long IWALK campaign. On Walking Wednesdays parent led Walking School Buses walk to school from the north, south, east and west, following low-stress routes. Graham Hill partnered with Seattle Neighborhood Greenways to develop a walking/biking map of the area; this supports year-long active transportation. In order to include bus and car riders, PE teacher Jupinder Gill coordinates Walking-Recess Club. Some students accumulated five miles over the month! All students record their daily mode of transportation, mileage, and weather, which can then be incorporated into academic life. Graham Hill Elementary is an excellent example of all the forms an IWALK event can take. Impressively they manage to roll them all up into one campaign. 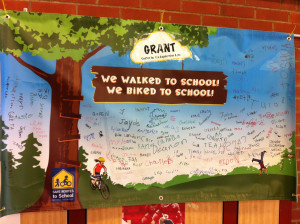 Grant Center for the Expressive Arts in Tacoma, Washington is already looking ahead to Bike to School Month in May after an excellent first Walk to School Day event in October. Parents were heard remarking, “I don’t know why we don’t walk to school more often!” While the free snacks and reflectors were a bonus for students, it quickly became obvious that the highlight of the day was signing their names on the event banner. The banner, with over 125 signatures, now hangs in the cafeteria where students point out their names with pride.

Grant Center for the Expressive Arts is situated in a quiet neighborhood with a large number of students living within a mile of the school. The community sees a great deal of potential for changing the culture around transportation and so do we!

Salmon Bay School in Seattle, Washington kicked of their month long Walk & Wheel campaign with a multi-school collaboration called Ballard Bikes, which happened to take place on one of the stormiest days of the 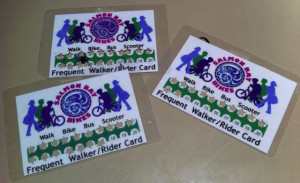 year. Each week during Walk & Wheel month, parents set-up a welcome station where students received stickers, refreshments and punches on their walker/rider punch cards. Students were very excited about their punch cards and could have them punched everyday by the front desk. Many students attached these cards to backpacks for all to see.

Middle School at Salmon Bay starts at 8:15 so walkers and bikers were often traveling in the dark, with some students biking over two miles. Organizers figured if they could get students out of the car in October, then it would be even easier to do in the spring!

All the schools highlighted here were part of our Feet First IWALK challenge 2013. This in an annual contest that includes planning information and support for IWALK schools. It is not too early to sign up for the 2014 IWALK challenge! Sign up today and get a jump on IWALK 2014.