Groundswell NW has been empowering NW Seattle to create, care for and activate parks and habitat for over 30 years. Join us on a tour of Ballard, where we got our start. The tour starts at Ballard Commons Park in central Ballard and proceeds counterclockwise for about 3 miles (without side trips), but of course you can start at any point and go in either direction. Enjoy!

Ballard Commons
West side of 22nd between 57th and 58th

Always bustling with activity, the Ballard Commons is a key feature of downtown Ballard. With a skate park, plenty of open grass, space for community events and of course its playful spray park, this is the perfect spot for people of all ages. Ballard Commons became a key element of the 1998 neighborhood plan which sought to create a municipal center for Ballard, with the library and neighborhood service center kitty-corner to the southeast.

To create eyes on the park, the neighborhood plan allowed the adjacent development to have an extra story in exchange for providing townhomes facing the park. Groundswell has held field days to help activate the park, and supported other efforts to keep it a safe place for the whole community. 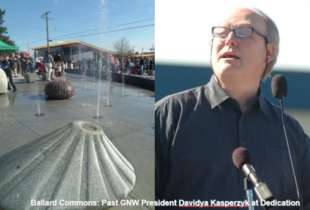 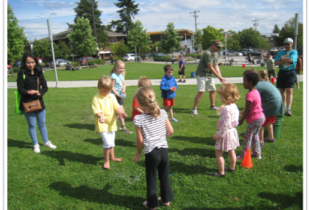 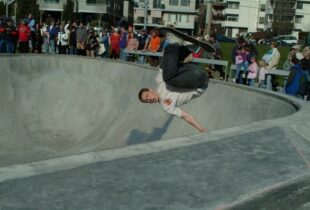 From the NE corner of the park head east on the NW 58th Street Neighborhood Greenway, passing the St. Luke™s Urban Garden (SLUG) on the south side, which the church established as part of its ministry to help the homeless by providing housing, meals, services and this place to raise food and learn gardening skills.

Serving as bike and pedestrian priority streets, greenways allow local access for vehicles, but with speed bumps, stop signs on side streets and occasional vehicular barriers, make the streets more comfortable for pedestrians and cyclists, especially those not comfortable with biking on busier city streets. 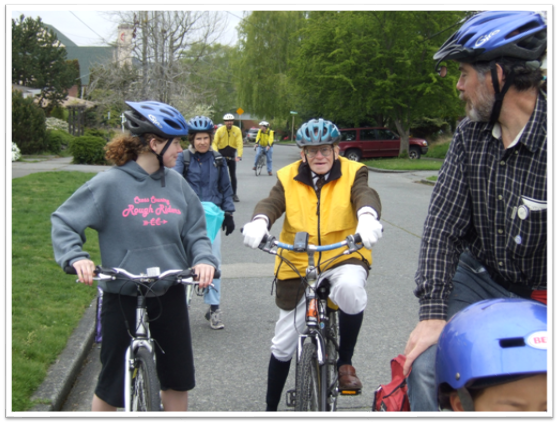 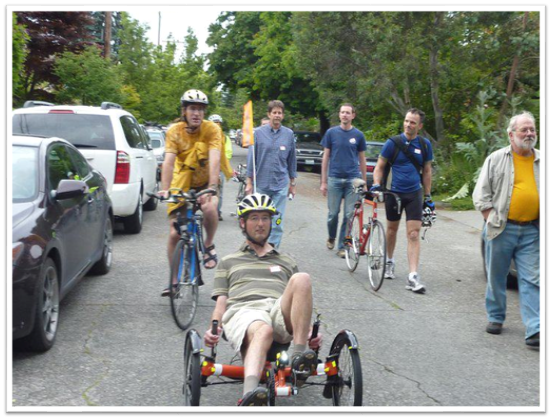 Head north on the 17th Avenue Neighborhood greenway, which came later as the greenway program developed.

Ballard Corners Park combines open space, green infrastructure, trees, play spaces, public art and history all in under 10,000 square feet. Identified in the open space inventory, the original purchase was a single vacant lot on the north half of today™s park. A house sat on the south end and was eventually purchased as well. The low walls used to define the living room are the old foundation walls. Its most noted feature is a charming living room set. The large sofa pulls you in, inspiring the urge to leap onto the fluffy cushions. But be careful because the whole thing is made entirely from concrete!

Like all Groundswell projects, none of this could have been possible without the help of the community. From the ramp and curb designed for beginning skateboarders, to the children™s play structure, this park was designed for and by the surrounding neighbors. The rain garden which runs along the whole east side of the park was one of the first in Ballard. It captures stormwater and prevents it from entering into our combined sewer drainage system. 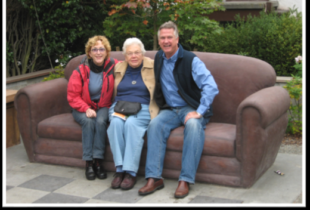 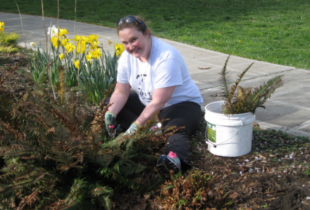 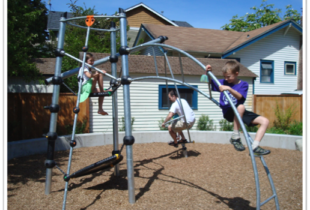 Continue north on the 17th Ave NW Neighborhood Greenway, crossing 65th at the pedestrian/bike signal. Turn left (west) on NW 67th Street (a potential future greenway) and continue on the path between Salmon Bay School to the south and their playfields to the north.

The playfield replaced a large blacktop play area with an artificial turf field and running track, embellished on the north end with ceramic artwork honoring supporters, including Groundswell. This was a project of the Salmon Bay School PTA. 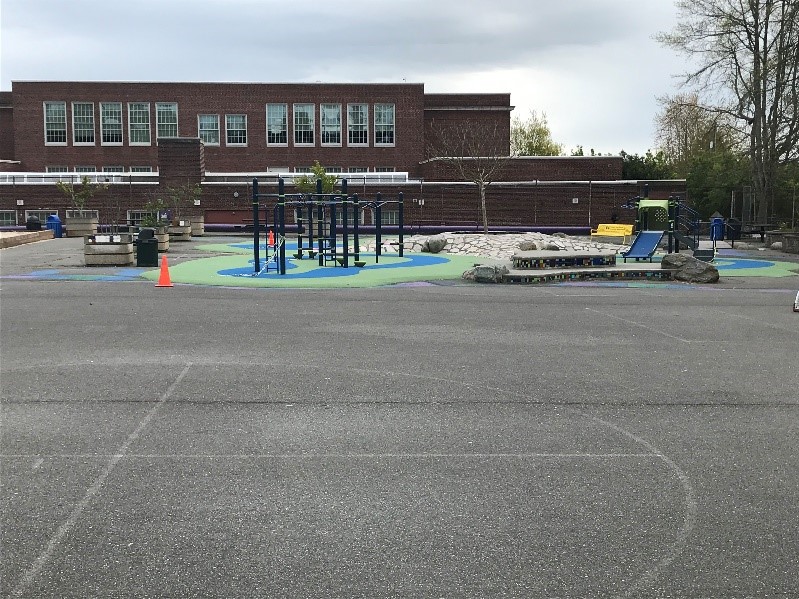 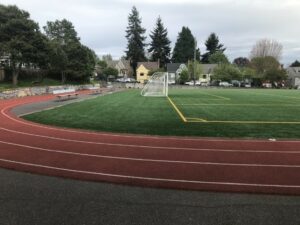 Continue west on NW 67th Street, or take a short side trip 1 block north on 19th to Salmon Bay Park. 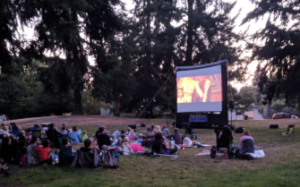 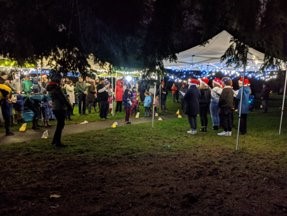 Follow the pathway through the park to NW 70th Street and head west, crossing 24th and the signal, then left down the west side of 24th Avenue NW. Across the street to the east, just north of 6724 24th Ave NW,  you will see an abandoned City Light substation, one of several identified in the Ballard Neighborhood Plan as an opportunity for community use.

Webster Park
South side of 68th between 30th and 32nd

What was once a sprawling black top for the original Webster School, and then an over-large parking lot for the original Nordic Heritage Museum, is now nearly always full of neighbors of all ages. Ball courts, and a large playground are perfect for those of the high energy sort, from tots to teenagers and adults. However, if you are just looking for a place to rest, take a seat at one of the many benches or set up a picnic spot on the lawn protected by trees. Spirited bas-relief murals by Charles Bigger and an attractive sundial by Chuck Nafziger will keep you company.

Webster was Seattle™s first pesticide-free park. It was recognized as Seattle™s Best Neighborhood Park shortly after it was completed, and continues to be a neighborhood favorite. In 2020, the old Webster School is being renovated to serve as a magnet K-8 school. 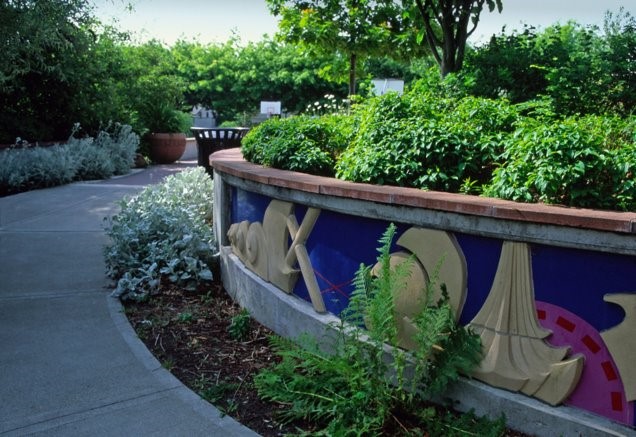 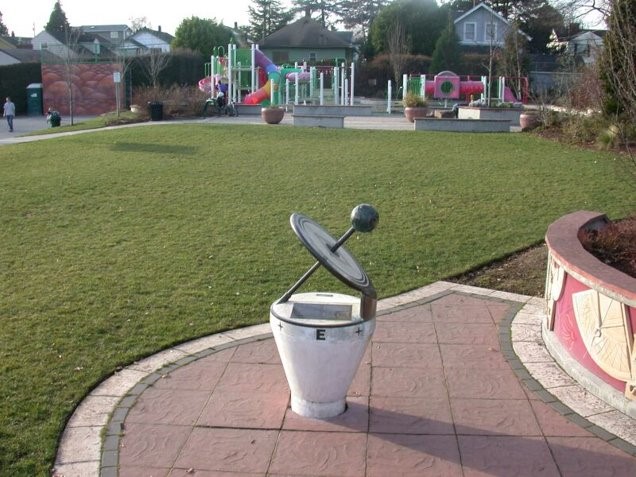 Exit Webster via the southwest gate to NW 67th and west to 32nd Ave NW. Turn right (east) on NW 65th St. Across the street to the south, behind Ristorante Picolinos, is another abandoned City Light substation. 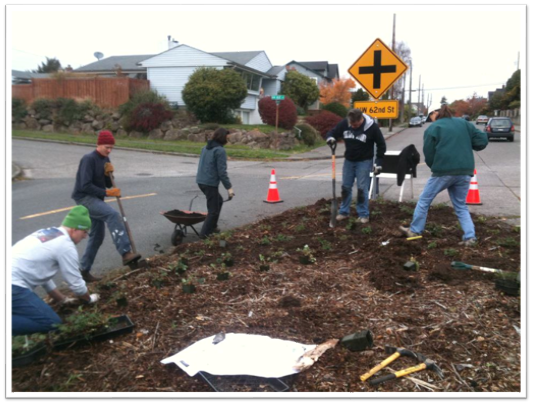 Continue south on the upper part of 36th Ave NW, taking in the view down NW 61st St to the Sound, past the landscaped south end of the median to NW 59th St. Turn left (east) to 34th Ave NW. Turn right (south) to NW 57th St. and the Neighborhood Greenway.

From this point, the main loop heads left (east) along the greenway just past NW 30th to Thyme Patch Park. Or take a side trip continuing south on 34th Ave NW, across NW 54th St and left (east) a short distance along the Burke Gilman Trail to the Salmon Bay Natural Area.

Side trip: Salmon Bay Natural Area
34th Ave NW shoreline street end, south of NW 54th St and the Burke Gilman Trail, and the shoreline flanking it on both sides

Marked by a colorful Marvin Oliver sculpture, the Salmon Bay Natural Area is tucked just off of the Birke Gilman trail. This is the perfect space to stop for a secluded break on your bike ride or walk. Take a moment and admire much of what makes the Ballard ecosystem so unique. Educational signage explains that this estuary, the transition from fresh to salt water, is a critical environment in the life cycle of salmon. The Salmon Bay Natural Area offers a rare opportunity to enhance this degraded estuary, as it remains the last piece of wooded shoreline in Ballard.

It was first identified as a potential public open space in the Ballard – Crown Hill Open Space Inventory and Action Plan in 1996, but efforts to acquire it were unsuccessful until 1998 when local Puget Sound salmon were listed as endangered. 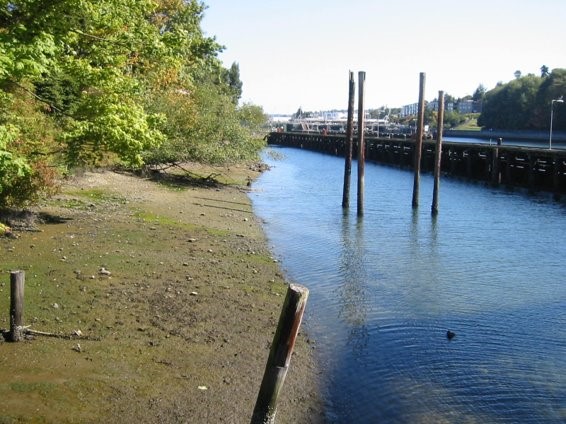 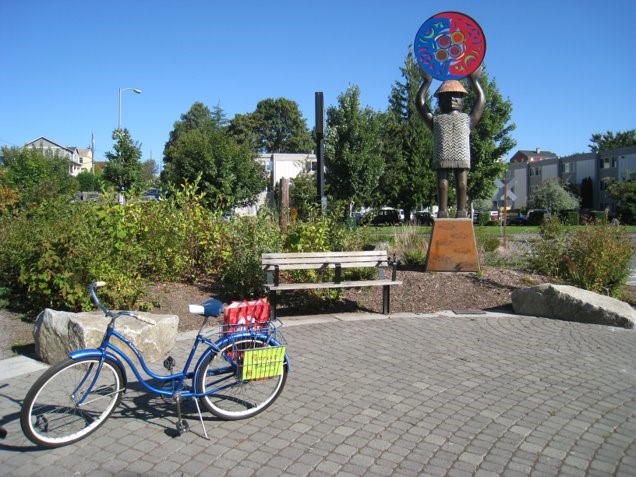 It is hard not to fall in love with this tiny neighborhood park which demonstrates that even in a small space you can do quite a bit. Intricate railings adorned with metallic flowers beckon you up the small flight of stairs. 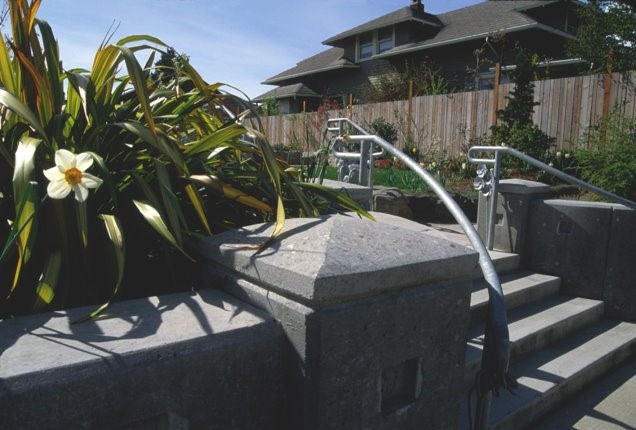 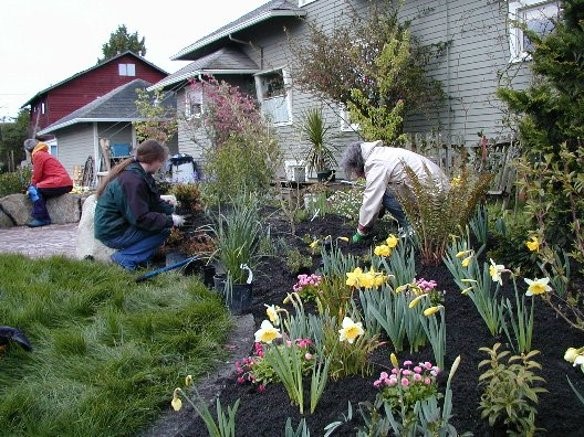 Continue back past the front porch area, maintained by the King County Master Gardeners, to arrive at a small P-Patch of about twelve plots. Much like Groundswell, this park thrives under the steadfast support of its surrounding community. Simply look back at the project™s origin for further proof: A local neighbor had originally bought this plot because he wanted a vacant lot for his kids to play in, just like he had as a child. His children had since grown up and moved away when we identified it as a potential pocket park in 1996, so he was a willing seller when approached, and other neighbors joined together to plan and build the new park.