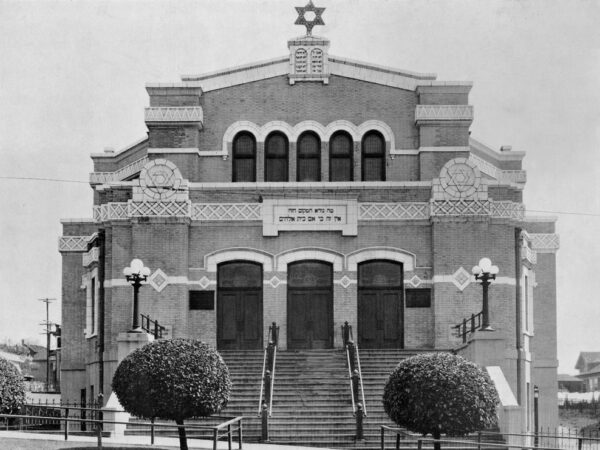 This walk will take you down quiet streets, often lined with trees, and in some cases with houses that were built shortly after the turn of the last century. Other streets are lined with sleek new structures, some under construction, signs of the changes the Central Area has seen in its complex history.

Today the neighborhood is a mix of people, some whose families have been here for generations and others who just moved in last month. The people of the Central Area, historically, were German and Scandinavian in origin, and then Japanese and African-American. In the midst of everything were Jewish immigrants, coming from Central, Eastern, and Southern European countries, as well as other parts of the United States, to make a new home in what was then still a very young city, Seattle. From the 1900s to the 1940s, the streets you will walk would have been alive with students going to Hebrew school, people going to services at shul or synagogue, shopkeepers and buyers making deals, carriages and cars and streetcars (and later buses) and more.

This walk covers approximately 1 2/3 miles. There are some grade changes, particularly in the stretch down to Washington Hall and then back up Yesler. Unless Garfield playfield and/or Garfield Community Center are open to the public, there are no public restrooms on this walk (the restrooms at Pratt Park are under construction at this time; Pratt Park is just a short walk from Langston Hughes Performing Art Center, where the walk ends).

Please note this walk is not an exhaustive history of Jewish life in the Central Area, but hopefully it will give a flavor of what once was. For more on Jewish history in Seattle and around Washington, I highly recommend the book Family of Strangers (Cone/Droker/Williams). I am grateful to Howard Droker, one of the authors, for his many comments, recommendations, and technical assistance in planning this walk.

NOTE: An important distinction in Jewish communities in Seattle is between Ashkenazi (Jews from Central and Eastern Europe) and Sephardim (Jews from Southern Europe and the Mediterranean). Ashkenazi Jews spoke German or Yiddish, where Sephardic Jews often spoke Spanish or Ladino. Foods, styles of worship, and cultural traditions were often very different, and synagogues and other Jewish organizations were often divided between Ashkenazi and Sephardim. Original Sephardic Jews in Seattle came from Turkey and the isle of Rhodes.

ALSO NOTE: Seattle™s traditional ˜distinctive Jewish neighborhood™ from the 1890s (starting with a few stores on Yesler Way) into the 1960s was from 12th Avenue up into the 30-something Avenues, and from Washington Street north to Cherry Street. Although this neighborhood was home to most of the institutions we™ll see on this walk, and home to many of Seattle™s Jews, it was never more than 40% Jewish.

NOTE: If you are doing this walk during the pandemic 25th Avenue from Columbia south to Jackson (and beyond) is closed to vehicles except residents and deliveries, as part of Seattle™s Stay Healthy Streets program. You may observe more people walking and cycling in the street. Please feel free to join them, but stay alert for vehicles.

If you are coming by transit Metro route 3 stops on Cherry, #48 stops on 23rd, and #8 stops a few blocks away on MLK. You can also walk south from Metro route 2 on Union. Please see Metro online for schedule information.

Talmud Torah our walk begins at what is now Masjid al-Taqwa, a mosque, at the corner of 25th & Columbia. Talmud Torah was a city-wide religious school, built in 1930, and this was its second or third home. Talmud Torah was used through the 1960s(?) what happened to the building after that?. Although Seattle™s Jewish community had been centered around Yesler Way (as we will see on our walk), after World War I many Jewish families purchased homes to the east of Garfield HS. This led the Talmud Torah to be located to where the families were at the time of construction. 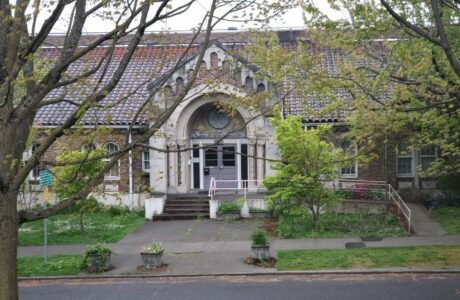 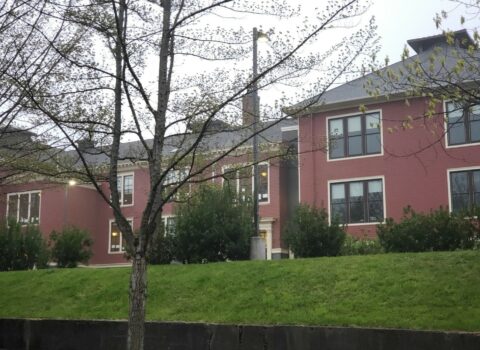 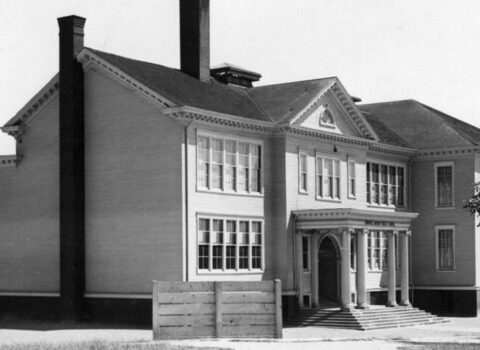 We now walk south to Cherry Street; there is a pedestrian-activated signal to cross at the corner. By the early 1930s, Jewish Seattle™s business district had moved north from Yesler to Cherry.  Many of the small business storefronts on Cherry between 23rd and MLK were Jewish-owned businesses in the 1930s and 1940s, and Jewish businesses were still here into the 1960s.

From here, walk south along Garfield playfield™s tennis courts and baseball diamonds, the oldest continuously used baseball facilities in Seattle, dating back to even before Garfield High School itself (1923). You™ll see the northern edge of the Garfield gym, built when Garfield was remodeled during the mid 2000s. Garfield is one of Seattle™s oldest high schools, with alumni including that Jimi Hendrix fellow, as well as Quincy Jones. Many of Seattle™s Jewish community students attended Garfield in the 1920s and 30s, and into the 1960s, alongside a very diverse population including Japanese-American and African-American students, as well as rich kids from Broadmoor.

Turn left at the end of the Garfield campus, on Alder Street. Walk one block to 26th Avenue, and turn right.

Walk south on 26th Avenue, one long block to Fir. On the southeast corner, what is now the Upper Room (Church of God in Christ) was the Machzikay Hadath Synagogue. Formed in 1929 by more traditional members of Herzl (which we will get to shortly), the congregation moved into the building you see in 1933. In 1968, the rabbi was robbed, and in 1970 the building closed. The congregation merged with Bikur Cholim and is now located in Seward Park. NOTE: the squares visible along the lower part of the building were originally memorials or thank-yous to members who donated to help build the building. On some buildings the squares have been removed or replaced, but these are original. 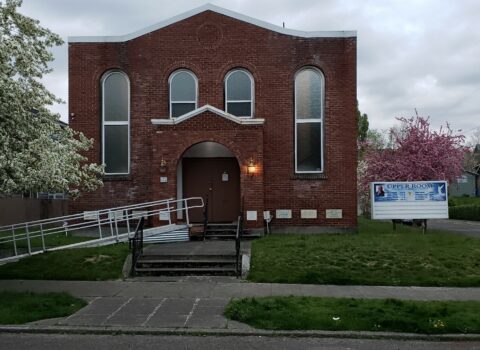 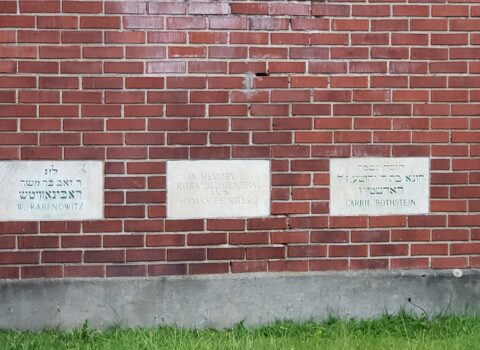 From here, turn right on Fir. Walk west to 23rd Avenue. You can cross the street here legally at the corner but there is not a signal; depending on traffic volume and your comfort level, you can go one block south to Yesler to the light there, then turn back to Fir.

From 23rd and Fir, continue west on Fir down the hill. You™ll pass the Spruce Street Mini Park at 21st, with playground (not available during pandemic) and grass to take a break on if you need one. From here we start up hill to 20th.

On the southwest corner of 20th & Fir, what is now Tolliver Temple was the home of the Sephardic Bikur Holim congregation. Originally at 13th & Washington, in 1929 the congregation moved into their new building. In 1959, the building was sold to a Baptist church, and the congregation began to move to Seward Park. 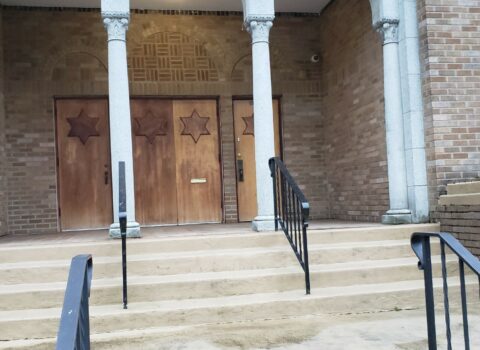 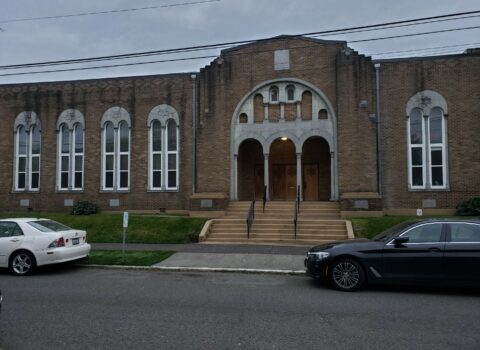 From here we go north one block, and at the southeast corner of 20th & Spruce, we see the former home of Herzl congregation. The building was inaugurated in 1925; the congregation originally was at 16th & Fir. Shortly thereafter, as we saw previously, part of the congregation broke off in 1929 to form Machzikay Hadath at 26th & Fir. In 1970, the congregation moved to Mercer Island and merged with Ner Tamid. Since then, the building served an important role in Central Area history, as the first home of the Odessa Brown Children™s Clinic. Currently it houses First Place School. 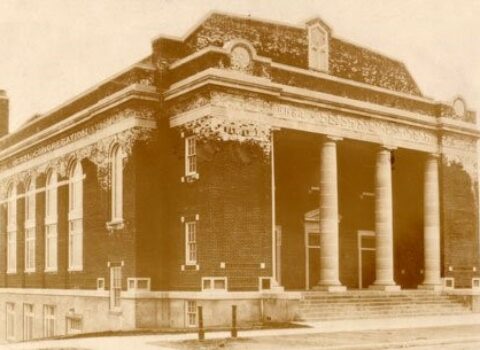 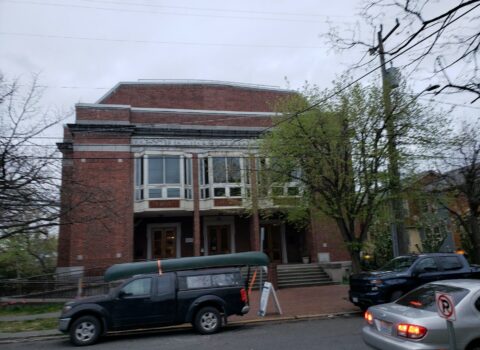 On the other side of 20th, the southwest corner, we see an important reminder of another chapter in Central Area history, the People™s Wall. This mural commemorates the second Seattle  headquarters of the Black Panther Party, located here in 1969-1970 (building since demolished). 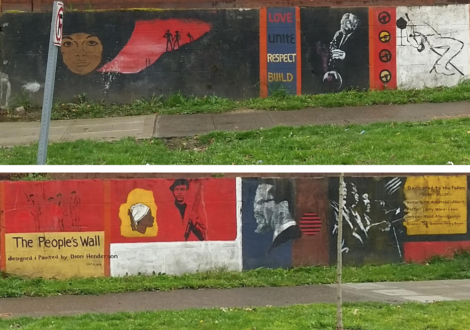 Now we head west on Spruce, one block to 19th. Turn left, and take 19th back to Fir. Turn right, and head down the hill to 17th. The Sephardic Ahavath Ahim synagogue was built here in 1922; the congregation was started by immigrants from Marmara (a region in Turkey). It closed in 1939 and members went to Ezra Bessaroth or Sephardic Bikur Holim. In 1960, the land was sold to a church group, and is now home to Church of Jesus Christ Apostolic.

Continue down two more blocks  to 15th, where what is now the Goodwill Baptist Missionary church, in 1918 the Orthodox synagogue Ezra Bessaroth (Sephardic) was opened. The congregation remained there until 1958, when they moved to Seward Park. 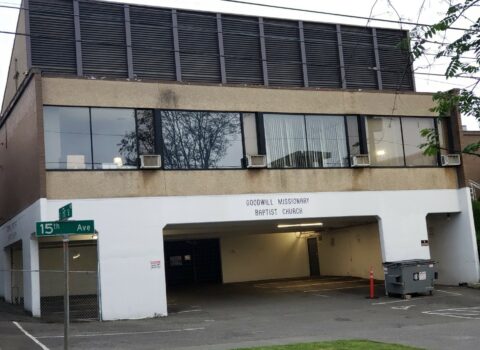 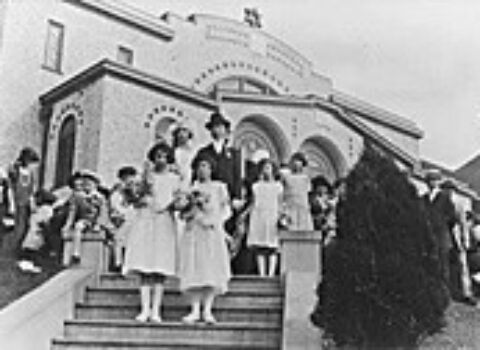 The Ezra Bessaroth building on the same site in 1924, a wedding party posted on the steps

From here, we take a quick detour, one more block west on Fir to 14th. On the northwest corner sits Washington Hall, a Central Area landmark carefully restored in the last decade, and now owned by Historic Seattle and on the National Register. This building was used by various Jewish organizations (rented out) for various occasions over the years. The building was originally the home of the Danish Brotherhood when built in 1907; it was owned by the Sons of Haiti during the 1970s, and the second floor continued to be home to many cultural performances. Marcus Garvey and W.E.B. Du Bois spoke here, and artists like Duke Ellington, Jimi Hendrix, and Bille Holiday performed on the upstairs stage. If the building is open and the staff are willing, take a look around upstairs. 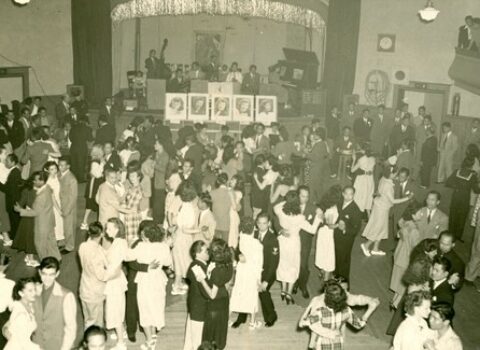 2nd floor ballroom from a Filipino-American dance in the 1940s 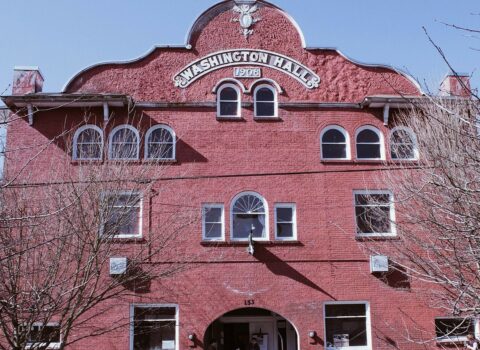 From here, walk south on 14th to Yesler. On the southwest corner sits Bailey Gatzert Elementary. This school is named after Seattle pioneer Bailey Gatzert, a businessman and Seattle Mayor (elected 1875), one of the founders of the Seattle Chamber of Commerce and a founding member of the first Jewish house of worship in Washington, Ohaveth Sholum (8th & Seneca).

Now turn east on Yesler and head up hill toward the end of our walk. For decades, Yesler and Fir were lined with many Jewish stores, including restaurants, grocery stores, butcher shops, bakeries, even sausage factories. There were non-Jewish stores as well, barbershops, drugstores, even a movie theater (Yesler Theater). In more recent decades there was a Japanese-American home for the elderly (Keiro) on Yesler as well.

You have now arrived at our last stop, what is now Langston Hughes Performing Arts Center, at 18th & Yesler. This building was built from 1909-1915, and was the home of the Bikur Cholim (Ashkenazi) congregation. In 1970 the congregation held its last services here and moved to Seward Park, and the building was then purchased by the City of Seattle and reopened in 1972. It™s served as a community center and performing arts space ever since. Extensive renovations in 2011 preserved the architectural character of the building while modernizing the facilities. 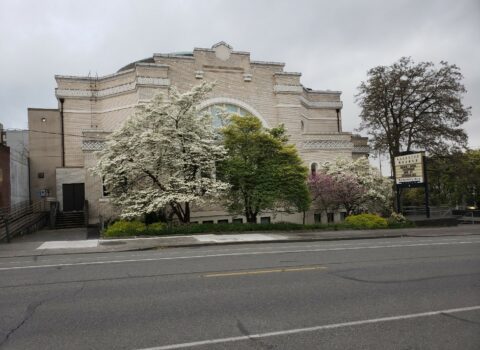 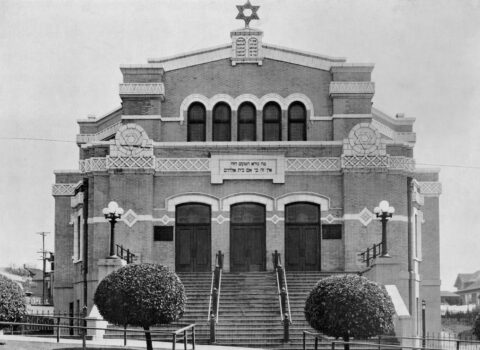 Depending on how you started your walk, you have plenty of options to choose from here. You can take Metro #27 right here on Yesler, walk over to Jackson for Metro #14, walk down to 14th & Yesler for the First Hill streetcar. You can walk east a bit to see Pratt Park, named for civil rights leader and Urban League director Edwin Pratt (as of this writing the restrooms and water park are under construction). You could get coffee at Broadcast Coffee, across Yesler from Pratt Park.

You could also walk a few more blocks to 17th & Main for a bonus stop. 17th & Main was the third home of Settlement House, an institution for the Jewish community (Ashkenazi and Sephardic). Free religious school, sewing school, night school for learning English, citizenship classes, and free baths! The Settlement House, aka The Educational Center, was a project of the Council of Jewish Women, whose members initially were the wealthier and more assimilated members of Temple de Hirsch (now Temple de Hirsch Sinai, located on E. Union Street at 16th Avenue). The Settlement House was an Americanizing institution with the mission of easing the immigrants™ transition to American life.